Right in the heart of the Don Vasco route, behind the walls of the Franciscan monastery, the first built in the whole state of Michoacán.

This “place of the hummingbirds” has an enormous surprise in store for us. Its impressive atrium with the hundred-year old olive trees and atrial cross fills one with the same sense of tranquility and respect as do its somber interiors, and it gives one a very clear idea of the importance Tata Vasco wanted to give the monastery. Take the time to wander around the atrium of the monastery as though you’re praying the Via Crucis and see the very mysterious stones with cryptic, non-religious symbols on the wall in one of the 16th century open chapels. The Virgin of the Canary Islands brought from Spain, this delicate painting is dated 1488, four years prior to the discovery of America.

He old parliament of Michoacán, the popular Palacio Clavijero is now a museum that was once the biggest religious building in Morelia. Founded by the Jesuits at the end of the 17th century with the specific name of San Francisco Javier Clavijero, the building is a splendid example of the tablerado, or Morelia Baroque style. In another era the old wash basins at the Templo de las Rosas took their running water from the aqueduct, which also supplied public fountains and the homes of the powerful and wealthy. The Palacio Clavijero has always had several functions: it has been a church; it was the University of San Nicolás, a seminary, a public library, a cultural center…and is a reference point for all the people of Morelia.

Popularly known as the Convento de Las Rosas, this church has an astonishingly high altar with four lateral altarpieces and the refined splendor of the religious art of the time. On the side adjacent to the convent, the railings of the nuns’ confessionals open like windows. One can walk along the cloisters of the convent –now a music conservatory– listening to the music or to the strains of the Morelia children’s choir.

You have to get to Cuitzeo, meaning lake in Purépecha, by the road that crosses the big lake, and as you approach, you can see the buildings and houses of this magical town slowly take shape. The Franciscan monastery dates from the 16th century and behind its walls it safeguards great art treasures in the form of refined cloisters, patios and some splendid mural paintings. The urban layout of the town of Cuitzeo makes it difficult to resist taking a relaxed walk among its quarry stone houses with their flat roofs, with not a tile in sight.

Wonderful reasons to discover other jewels

Managing to understand the immensity of the missionary work in the facades and interiors –sometimes austere, at other times very richly decorated– of the old monasteries and churches that visitors see as they descend upon the plazas of these three towns and cities enhances the pleasure of seeing them. 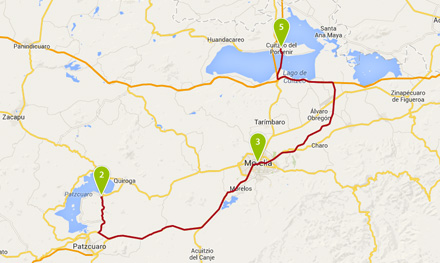 Where modernity and elegance converge

Gateway to paradise and tranquility...

The Essence of the Purépecha - Don Vasco 2